Tales of Horror: The Dark Man

When I was a boy there was a black man that I would see. Out of the corner of my mind, hidden behind trees and corners. He was there in my house, in my life. I would hear him walking up the steps of my father’s house in the dead of night. And I would hide under the covers. I would see him in my dreams. The choker, one that would suffocate me with a stare.
This man was not black, as in African American, or even a man at all. I should actually refer to him as The Dark Man, because his purposes for me were never clear, but always hidden. I would lie awake at night. I would pray that he would go away. But I would feel my body run cold, even if the blankets were warm. Even now as a man I wrap my arms around me, as if by instinct, grounded by the child-like belief that mere covers could save me from a being dark, ancient, and powerful. How would you know this, some have asked me. I know because it told me so. This dark man was a demon. One that haunted me in the night, a taunting dream that would lie in bed with me, whisper threatening lies in my ears. Words without a voice, ones that echoed in my empty unoccupied mind.  Many of you don’t believe in demons, or manifestations of evil. They are the guilty conscience that hangs over us like dark clouds in the sky, most say. Until this night, I’ve never written about the dark man. I was always afraid of him coming back. I have a family now. Lord forgive me if I were to invite such a thing back into my life. But now that the light is with me, the dark man comes back less and less. The dreams are less real now. If he ever came back, it would never be the same.
There was a night in July, when I was 10 years old. I had recently come home from an informal reunion in Sonoma County, north of San Francisco, where the hills are made of gold and from the earth pours wine. The specters of long dead miners and Chinese rail workers haunted the hills, their legacy paved over with boutiques and high class restaurants. I was lying in my bed at home, my brother sleeping soundly next to me. The Dark Man was there. The night light did not flicker. The air was not frosty or cold. There was no ghostly herald or cultic preamble in cartoonish languages. He was there, lying next to me, heaving rattling, emphysemic  breaths. And what I remember, so clearly, so unequivocally, its words. “Ahh… don’t be like that.”
I froze. I wanted to cry.
It rolled over me, on top on me. Every muscle tensed on my body.
My eyes closed tight, he told me a little about himself.
“I’ve been alone, so alone. Sentenced to the depths of Hell, without respite and closure, a soul that asks on those passing through what came of their legacy of my life. I owned a house at once, hidden away in the forests of Bavaria. I had a cart and some sheep, my small cottage. I lived alone, skinning and tanning pelts under a cold distant sun that would pierce the canopies of my grove with shafts of goodness finding me in the depths of my loneliness. 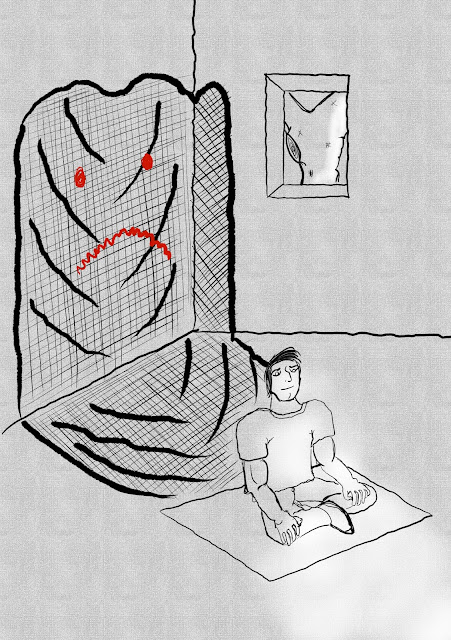 
In these times, I am not afraid of the Dark Man any more. But I know he is still there, somewhere, praying for death. Should I feel sorry for him? No. What good is the Dark Man to me, but the memories of youthful trepidation? Yet I am thankful. I’m my studies on theology and the demonic I have reasoned that such soul would be allowed to hate me because the Dark Man’s presence teaches me what it means to languish unchallenged in loneliness. For so long I had wrapped melancholy around me like a blanket, to shiver bitterly, to deny the charity of friendship to others and myself. The Dark Man cursed me when I was young with its sadness. I could never curse another to bear mine. And now, in my office, on this word processor, I want you to know what happened to me. Melancholy like a good book, or an engrossing film can be so gratifying. Some revel in it, crushing themselves in a vise. But like a monkey on my back I have worn the Dark Man and put him off, never to wear him again. One day I will forget him, and then he will finally be just another shade in the pit.
Posted by StuartTheAuthor at 6:26 PM