I realize that a writer’s blog should be memes and personable stuff, which I suck at. I really am a nice person. Promise! I’m just difficult to wrangle and coax out in person, let alone through the impersonal channels of the internet.

But hey, I’m good at “being interesting.” This is what I’ve been told. So I’ve come up with a regurgitation of one of my recent reads that has really gotten be immersed in thinking.
There’s an essay called “Inventing the Enemy” by Umberto Eco, a recent author in my collection that is occupying more and more of my time. Even now, in light of what is going on around the world, I thought the essay shows how anyone can create an “enemy.” An enemy doesn’t have to be someone were are at odds with in this scenario, just someone that we consider alien to us, or not of our kind, nationality, race, social standing, or otherwise. I wanted to give a birds eye view of Eco’s argument below. The essay is still  available in print and I highly recommend reading it, even if the language is stilted and archaic. (It was originally written in Italian and translated pieces can seem stale on the outside.)
I find the above really fascinating, and my synthesis of the arguments is limited by the amount of detail Eco lends to his argument. What is more sobering is his subsequent treatment, and potential explanation for the origins of antisemitism, not only because it is still fresh in our minds from the Holocaust but because of Arabs taking their place in the 21st century due to the events of 9/11. Despite dominating fields of medicine, law, finance, science, physics, mathematics, and humanities, Arabs encounter daily opposition for their skin color and religion simply because they are externally different or foreign within the parent culture of the United States.

All these ideas are potent for discussion, but I’ve discovered personally that even with lengthy discourse there is still a degree of separation between theory and practice. We can talk about something in depth, but we can never see that we too make our own enemies on a daily basis, even subconsciously, and not even care about it.
They key point Eco makes, the final conclusion he makes in his essay that is chilling to say the least, is that having an enemy, or maintaining a diet of enemies to consume and present, creates positive growth. I will leave you with these. I hope they make you think about the weightiness of his conclusions. 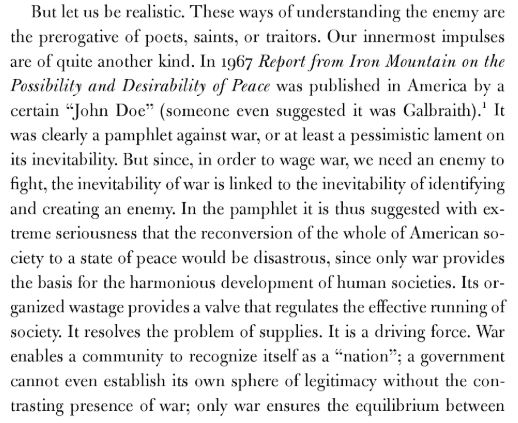 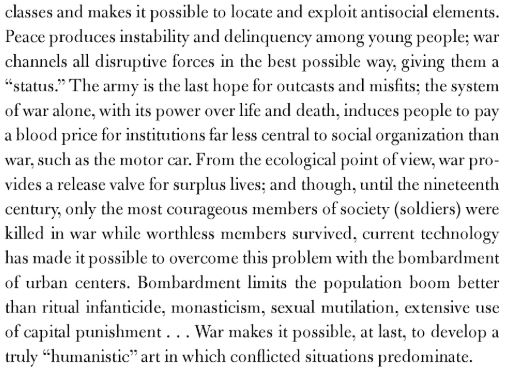 The Unintended Effects of Capitalism

Earlier I wrote what I believed to be the downsides of socialism, despite aligning myself with socialist values and the contractual obligations we have to our fellow man and their well-being. Capitalism has always been decried by the disenfranchised and maligned from domestic regions to international ones, specifically implicating the richest and most powerful in a conspiracy to hoard the wealth of the middle and lower classes. Literally or figuratively, the idea is too amplified to take seriously. But maybe that’s just because we don’t live in areas where this exploitation is commonplace. This week, when I was reading Literary Orientalism, Postcolonialism, and Universalism by Abdulla Al-Dabbagh, it never occurred to me the postcolonial implications of globalism and its roots in capitalism. I would be remiss if I didn’t say that the fruits we reap today were long sowed by the shifting powers of continental Europe over the course of centuries, but where things lie now is the result of socio-economic Darwinism. The causal relationship between Rome and the colonization / administration of the known world created a template for colonialism that Western European powers would leverage to acquire sacrilegious amounts of wealth. Married with capitalism, the two are an unstoppable font of progress, but one made at the expense of literally billions of human souls.

The success of Capitalism is based on the price of goods, their overhead, and the materials that make them. If the price is right, we will buy it, even if we don’t need a Simpsons themed vibrator or a George Foreman grill. If the cost of making the product is less than the cost of selling, then the product has a longer shelf life of viability. And if the materials are readily available, production and shipping logistics will diminish turnaround time. This begets superfluous spending, ill treatment of underpaid workers in foreign countries, and built-in obsolescence, just to name a few of the ethical flaws of capitalism. Even the means by which stocks are traded, now executed by financial programs and automation software, are carried out with cold, logistical efficiency, eerily reminiscent of the bevy of apocalyptic science fiction films that depict machine uprisings. In this case however the enslavement is complicit and the effects subliminal.
Those that come to the defense of Capitalism are typically those that benefit from its principals the most. Those that decry it, are likewise those that benefit least. And any supporter that preaches the benefits of the opposition are cuckolded. Free enterprise, free market, and reduced oversight proved to be the most lucrative years for the United States. Yet factory conditions were oppressive and deadly. We worked children 12 hours a day, 7 days a week. There is a fine balance that other countries struck in our stead, but the idea that we romanticize Capitalism is uncomfortable to me. The human soul is reduced to an asset of the company that can be sold off or liquidated at a moment’s notice. The employer has no responsibility to their employees, but rather the opposite is true. When I worked for Apple, employees were not given wages adjusted for their area’s cost of living, and only those that gave their life to the company line were given raises, promotions, and transfers. The atmosphere was religious, in a way, and much of the same goes true for other tech companies like Oracle. At one point we were given feedback on how to counter the effectiveness of the Microsoft OS, when my experience in the IT field proves overwhelmingly the opposite. Apple’s company culture was touted as the greatest of any company, while Chinese workers were committing suicide in their factories, because of an unrelenting wave-after-wave of product releases. Capitalism may be good for a small few, but these moguls depend upon a labor base to get that done.
I take issue with how Capitalism is indicted on the world stage as an instrument of the West by way of product exposure. While it’s true that we forcefully engaged in trade with Japan, and other European Nations took their share of Southeast Asia, some have positioned that the dominance of McDonalds and Microsoft are tools of imperialism. Some argue, including Abdulla, that postcolonialism is an erroneous term, because the US is still moderating national trade and willing to engage in international conflict to secure assets. But I don’t believe that Bill Gate’s original program when deploying the first build of Windows was world domination. He exudes in many ways the rags to riches dream of Capitalism, the very same dream that many others have claimed. (Immigrants included.) Yet the ethical toll of Capitalism is far reaching and unstoppable. It makes me wonder if Adam Smith, on the publishing of The Wealth of Nations said, “Now I am become Death, the destroyer of worlds.” Progress is costly, when allowed to be free.


Posted by StuartTheAuthor at 12:14 PM No comments: