The Memes of Racism

I was talking to my wife the other day about memes, which, if you’ve been living under a rock for the last 15 or so years, are captioned pictures of viral content that have taken on almost organic consciousness on the internet. Typically they are funny, or they comment on current events specifically. I mostly know them as pictures of “puppers” and “doggos” eating “chimkin nuggets.”

In human history we have recognized symbols either tangibly or abstractly. For instance Moses from the Old Testament is a symbol of Christ (of Type) as a mediator between God and Man. A cross represents, and points to, the specific time in history when Christ was crucified. The invisible hand imagines an intangible force based on the movement of wealth in a free economy, as put forth by Adam Smith in the Wealth of Nations. Or, the statue of the Shinto god Hachiman could represent either war, or the essence of the god himself when present in a shrine. Personally, I believe that memes today are the avatars of pessimism and cynicism, products of the mutable post-modern age. And at the risk of misusing “post-modern,” because even the word means nothing now, post-modern typically is a junk drawer term for any deconstructed position that critiques reigning epistemological authorities or traditions of thought / belief.

What got me thinking about memes yesterday was the hijacking of one such meme, “Pepe the frog” and its use by neo-Nazis and white nationalists (AKA the Alt-Right).

A famous example of a neutral symbol being commandeered for hate is the Swastika, which originated in a host of Eurasian religious traditions. In Hinduism, the symbol was associated with luck and general wellbeing. While the origins of why the Nazis took this symbol escape me, I want to say that it had something to do with the belief that India was once known as a seat of a powerfully advanced race of Caucasians, but don’t quote me on that. Anyways, regardless of the origin of the Nazi belief, the symbol was taken and used as a hate symbol. Also, the image of the cross of Christ’s crucifixion has also been co-opted by White supremacists and the KKK by using it to intimidate African Americans by burning them on their lawns, or public places. I think it’s interesting then that people have taken Pepe, something so ephemeral in the grand scheme of things, and created a hate symbol out of him.

While the swastika was a symbol of fascism, memes are self-assigned their meaning. People view them and ascribe meaning to them. In marketing language, viewing an ad (image or otherwise) is called an impression. So when we view memes they are impressions that we encounter. Fascist symbols are ubiquitous and are widespread. They are typically put in public places, or on medals of service, but they are not however inside a person’s living area, unless the symbol was put there. In that respect the symbol can be avoided. I think what makes viral media so impactful is that you can’t avoid it now that the internet is integrated with nearly every aspect of our lives. Not only that, memes already are an expression of the cynical and apathetic zeitgeist we currently find ourselves in. That a meme places the viewer at a disadvantage by making opposition to the image seem petty or disproportionate in use context, the power of hate symbols spreading on the internet as memes are amplified. Furthermore, the impressions are personal, inside the four walls of home. They have penetrated the inner space of our lives, and we cannot escape.

As a creator of content, the reality that someone can insert meaning into something I’ve created is extremely compelling. My heart goes out to Matt Furie, the creator of Pepe, because his symbol has been effectively stolen from him. His resulting anguish is depicted in his response to the hijacking of his creation: 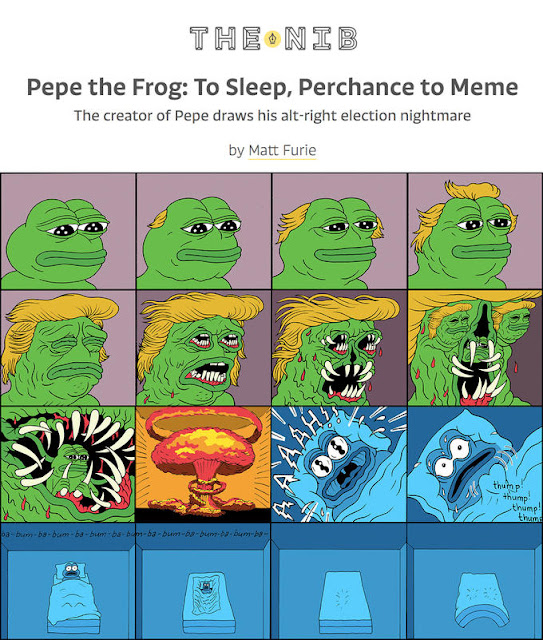 
Posted by StuartTheAuthor at 11:39 AM No comments: