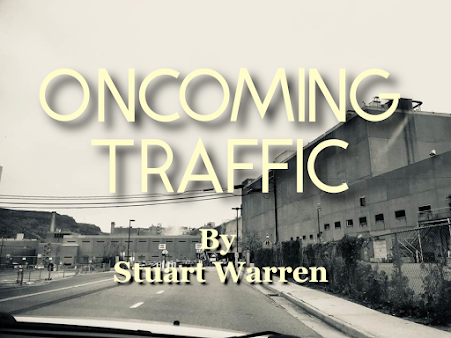 There was traffic on West 580, right in front of the Richmond-San Rafael Bridge.

Traffic rarely happens. When it does, it usually inspires fascination, even wonder. The passing traffic does not stop. Motorists spying in the moments between moments. Life oncoming, then gone.

This time was different though.

There were two cars hedged off to the right shoulder: a 2038 Tesla sedan and a 2018 Honda Civic. The rear crush points on the Tesla were pancaked—what remained of the trunk space, mostly gone. I glanced out of my window and saw the two drivers in a heated fight, a paramedic between them with her hands up. A police officer was dragging a dumbbell set—ejected from the trunk of the Civic—off the center lanes while we waited.

By 2028, most of the Bay Area was autonomous. By 2032, the rest of the state followed. The current Administration established a buy-out program for manual-pilot autos, encouraging the conversion. But, among the millions, a small minority held out. Mostly older men, and a younger generation galvanized by passionate rhetoric to retain their “right-to-drive.” When accidents happened, it always involved a manual-pilot car. There would be a highlight on the evening news—national coverage if the collision was big enough.

The Civic’s owner was red in the face with anger, spittle ejecting from her mouth. It wasn’t about the car. She stood her ground. This would be on camera, the pavement her stage. Ten-thousand talking heads explaining the nuance of car ownership, the “right-to-drive.”

It was something we debated at work, before our managers would step in to re-establish office etiquette. At church, I would argue the nuance of scripture, how the church adjusted for cultural changes, while others flatly denied my points, on the basis of free will and choice. In school districts some advocated—think of the children, they would say—for manual-pilot school busses, that it was unconscionable to entrust students to the cold will of the onboard intelligence.

But as passionate and antiquated the logic was, we all knew that 94% of auto-accidents involved manual-pilot vehicles. 100% of all autonomous cars were zero-emission, and manufactured by carbon neutral companies. Average commute time was lowered by 30% as the speed limit was raised by 25% across the western United States.

The police officer signaled to the line of stopped cars to proceed after a few minutes. I cracked open my book and thumbed to the page where I left off, feeling the pull of my body into the seat, the scene disappearing from view.

Where 580 merged with 101 North, brake lights crept up along the frontage road.

Posted by StuartTheAuthor at 10:15 AM No comments: