Thank you all for coming today. My name is Stuart, the Best Man, and I wanted to take some time to talk about Jared for a moment.

Some of you might know Jared through Julie, or know him as a friend, co-worker, son, or colleague. I know Jared as a friend. We lived together in college for about a year and I had no idea that I would still know him almost ten years later. I have many stories about Jared, but one of them stands out. I had just moved in with him and was still feeling out my roommates for their quirks and oddities. Jared was the guy that came home late with other women, not to sleep with them mind you, but to do far less raucous things like cuddle and play boardgames. But I sat Jared down and talked to him explaining that what we did at the apartment, which was a complex in Isla Vista leased to exclusively members of Campus Crusade, was sacred. We were out on display for the world to see and I wanted to hold him accountable. To my incredible surprise, Jared listened. He heard me out. And we built on that moment a mutual, sacred trust that has sharped us together, perhaps like iron on iron, or something like that… 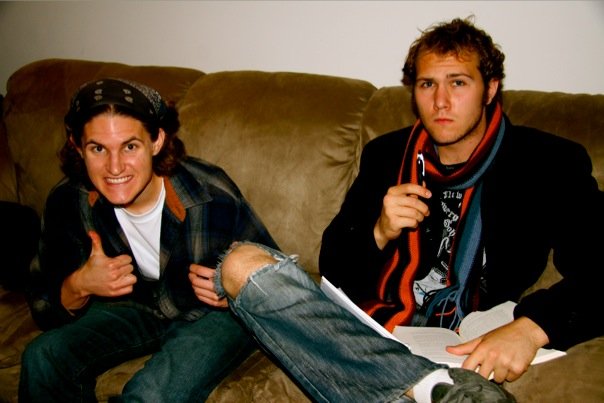 We are all told that we are special. That we can do anything. I don’t really believe that now that I’m older, but Jared is one of those people to watch because he is destined for great things. His career as a writer and teacher are already in their infancy and he has distinguished himself as top of his class, par excellence, with his colleagues and fellow members of the Academy. Why? Because Jared is a magnate for discussion, someone that people naturally gather to because they see in him something wonderful and special. He challenges us by his example to question our beliefs and follow in the footsteps of Socratic liberal education, that we may think critically about the information that vies for our affections in a world of increasing ambiguity and obfuscation. And incredibly, as much as Jared challenges us and helps to mold us, the teacher that he is, there is Julie that has drawn Jared to herself. You see, if you knew Jared, you would know his aloof spirit as well as me. “Bear-bear” is always on the run, unmoored by his years of growing up across the oceans in the jungles of Indonesia and urban China. But he has finally, at long last, found someone to tie him down in the boudoir and write a new story about a man and a woman finding each other, seemingly from opposite ends of the world, and starting another generation of rootin-tooting, suspiciously hairy, crawdad catching, Whites.

Posted by StuartTheAuthor at 10:15 AM No comments:

I read lots of posts from various outlets where writers disdain over the chance encounters they have with their family members during the holidays. Usually there’s some mention of a hometown acquaintance, some remnant of pre-adult life that reminds us of the inner-kid (not the good kind that reminds us of innocence and purity but from the harrowing experiences of LIFE). For me it’s the reminder that my family has yet to understand what I do for a living.

I write books and try to understand the nuances of my craft. I try to read books that have things written in them, usually good things, smart things. Who knows? One thing that my mom seems to take issue with is the use of pejorative language, or what she coins as pejorative. (After all language is first experienced by someone, then uttered with some implicit use. (The meaning coming after the experience.) Language evolves and changes. I remember the arguments I had when I was 7 years old about how saying something “sucked” was accurate, that the use of the adjective was justified in whatever prepubescent connotation. Now it seems moot to discuss the worthy use of the four letter words like “fuck” or “shit,” which draw their ire from both social associations and linguistic characteristics that typify them as “harsh” and “dissonant.” (Maybe I’m just writing an angry blog about being slighted? That could also be just as valid.) Anyways, the fact that we are so distracted by language’s oblique usage is frustrating. It illustrates just how chained we are to old paradigms of language and how narrow our views of history are.

My struggle is coming home to encounter another world, one that is disparate from my own. My parents grew up in the midst of great cultural movements of enlightenment. The free-love movement was in full swing, the civil rights movement was being established and validated after decades of disenfranchisement. And yet despite all this, my progenitors have succumbed to the malaise of the 80s and 90s, eschewing the zeitgeist of progressivism for complacency and comfort.

I have the benefit of being born after their confusing and trying upbringing, but I am likely blinded by my own trials prominent in the digital age of misinformation and alt-truth. The adage that we must reference historical setbacks, lest we be doomed to repeat it, is true and valid. I pray and hope that I carry the torch forward with the required bravery to ensure that future generations are spared. Then again that could be wishful thinking. We are possessed by a condition of sinfulness that transcends human history.
Posted by StuartTheAuthor at 4:29 PM No comments: