Another Book Finished: The Prague Cemetery

Finishing The Prague Cemetery by Umberto Eco was not nearly as satisfying as The Name of the Rose and Foucault’sPendulum. I don’t mean to say that it wasn’t good. It was fantastic! But the end result of finishing the book was gaining a keener understanding of Antisemitism in the 19th century, specifically in Italy and France.
Eco intentionally wrote into the story a truly despicable protagonist. Captain Simonini engages in all kinds of espionage, dealing with terrorists and pedophile priests, not unlike the intelligence services continue to do today. The main difference seems to be that organized religion no longer has the sting it once did. The pope is no longer a temporal figure, but a spiritual one, and has no sway in political matters like predecessors did in the medieval period. So maybe an equivalent story today would involve the ubiquitous corporate presence of a popular brand, instigating a civil war in a developing nation because the cost of bananas went from fives cents to six cents apiece? Who knows…
The most disturbing aspect of the book, which is billed as a “thriller,” is that it is told from the first person point of view of Simonini (as well as a morally conflicted split persona and an unnamed narrator). The false narrative of anti-Semitism, the descriptions of the Jews from the mouths of racist newspaper editors, the internal investigations of the state into the finances of citizens, culminates into a believable lie. That the story is a cohesive conspiracy theory, there is a degree of credibility throughout, despite the fact that this story is actually a satire and deconstruction of the paranoia that gripped Europe at the time. Traditional ideas like the Divine Right of Kings and the supremacy of the Catholic Church were eroding exponentially, and in the vacuum a new middle class was rising to take back control of the state. In an effort to foil this new class and restore faith in the despotic European nations, anti-Semitism is leveraged to turn a sequestered community into the scapegoat for all of Europe’s woes.
The crux of the book is the development of The Protocols of TheElders of Zion, a supposed recording of the minutes of a Jewish council gathered in a cemetery at the turn of the 19th century, where leaders representing the twelve tribes of Israel conspire to corrupt gentiles through entertainment and proliferation of liberalism. Even though the document itself was debunked a century ago by a British newspaper, pointing out that several sections were extensively (and poorly) plagiarized from an existing polemical work pointing out the injustices of Napoleon the III (I think it was Napoleon the III…), it became the source text for the Nazi Regime and a tool for implementing what would be known as the “Final Solution,” that is the extermination of the Jews in Europe.
It sounds so fantastic that it can’t be true, but all the characters in the story except for Simonini are real people. Eco is just weaving together a plausible explanation for the underlying force that moved the racial tensions forward. The book is an application of Eco’s philosophy of creating enemies and the paradoxical relationship between intangible words and demonstrable change in the hearts and minds of people. And this is why the work is so persuasive.

The Characters in Our Lives

Characters, according to lectures I’ve observed on creative writing, are evocative yet simple. Real human beings however demonstrate a complexity that is impossible to record in the written word. Writing can approximate this level of detail through techniques like “stream-of-consciousness,” but what is presented is, ultimately, supplemented by our own imaginations. That’s why two people can read something and have disparate takeaways.
So, occasionally, I daydream and try to come up with stock characters. Typically, a good stock character is modular. I can take a shell (scoundrel, hero, novice, adept, anti-hero, tyrant, outcast, etc) and fill it out with contextual details that fit with whatever I am writing. For instance, I can use the scoundrel character and add to the framework characteristics like “auto mechanic,” “drunkard,” “self-conscious,” “experienced,” and “socially flawed,” letting the reader fill in the gaps and create a mental picture in their mind of a complete individual beyond anything that I could have designed. Life experiences will affect this visualization, creating this tangible person that wasn’t there before. So even though the character I created has no history or extant context at the beginning of the story, their totality is fleshed out before they even speak their first word of dialogue.
This can be applied to life in general. People everywhere are strangers to us. Just imagine when, driving on the freeway, there are at least a thousand people driving along at the same time, yet we know nothing about them. The truth is that each driver has a lifetime of experiences and stories, but we, and they, are pushed back by the fear of unfamiliarity. Technology, didn’t promote dissociative tendencies in people. The truth is that we must attenuate our communities deliberately, otherwise the world would be too much for us to handle. So, we identify shells, then apply details to create a narrative that suits our perspectives; also known as stereotyping, identifying the Other, and, by proximity, casual racism.
I enjoy reading partly because I like to take pause and wonder how derivative the character is based on the experiences of the writer. There are details to be extracted and beliefs to be mined from the stories we read, and how obvious/obscured they are demonstrates the talent of the writer. My personal pet peeve is writing that is utilitarian, specifically in shows like Family Guy where each episode is a thinly veiled treatment of the writer’s personal opinions. I think this violates the autonomy of the characters in the story. Good fiction ought to organically prompt discourse and debate, but what you see in Family Guy and similar programs, like Futurama and the Simpsons, are one sided debates with no countering equivalent. On the other hand, South Park once had an episode about Mormonism where Stan is dumbfounded why his father is taken by a religion conceivably founded on fabricated beliefs. Ultimately the clash occurs at the end of the episode when Stan is confronted by Gary, his Mormon counterpart, where the alternative perspective is offered: that despite believing in something incredulous, Gary lives a happy life with a loving family and is surrounded by a community of people that support each other. Tit for tat, an argument is made, a counter is offered, and it’s not cynical. The interaction preserves the autonomy of the character and the topical discourse is received by the viewer as genuine.
Something to consider, then?

Per usual, work on my third book continues. Life continues. I'm studying for an exam on IT Network+, an introductory course on IT management techniques. #DayJobThings... My daughter has been walking for a little while now and loves to listen to progressive metal.

Sorry, I realized that I hadn't given anyone an update in a while. I hope your lives continue swimmingly!


Posted by StuartTheAuthor at 7:21 PM No comments:

Fake News in the Wild

With all the hyperbolic whining about “Fake News” from both conservative and liberal alike, I had the opportunity to witness a real-world example of Fake News and see just how pervasive it’s effect had on witless people.
There was a post going around on twitter advocating pedophilia and the inclusion of pedophilia as a part of the protected status of the LGBTQ community that had gained the attention of a "Christian" personality on facebook. The later shared this post, therefore making it viral. Though it was not the post that I have below, it was something similar to it, or at least in the same spirit. 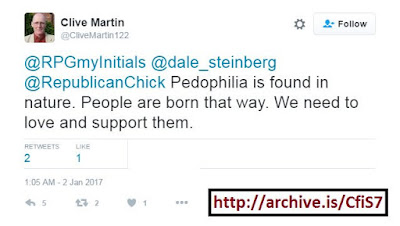 When you do some digging on the original twitter poster however, the user had less than 5 followers, and only two or three posts. It was the solitary post that was picked up by this Christian blogger to be “exposed.” Subsequently the Christian poster garners the attention of the most dank memes on the internet, gaining thousands of shares and likes for this call to action.
Now I’m going to go out on a limb here and suggest that the initial twitter post and the poster’s account were fabricated. For one it seems odd that there would be an advocate for pedophilia on twitter with little notoriety or following suddenly being discovered. (Search engines use algorithms to find content based on relevancy, which includes the amount of times someone’s page has been accessed. This is why my twitter account of 150+ follower fame will be passed up when someone google searches “Author” when there are hundreds more with 10,000+ followers.). Also, the fact that the post was engineered to spark moral outrage was made so transparently clear, seems fitting for Christian advocacy groups everywhere, which constantly are mining information for the link between being gay and committing acts of sexual deviancy. And, lastly, Facebook can only share links and pictures. Facebook, as of yet, does not allow the embedding of twitter posts that you can interact with. So anyone can produce a screen shot of something like Twitter and have people take it as the genuine article, despite going through all the effort in my case to make the poster seem legitimate.
The use of moral outrage to polarize and divide has become so commonplace that seeing this in action was almost banal. The fact of the matter is, however, that this “Christian Advocate” (who could be a fake account as well) successfully polarized both Christians and non-Christians, did not advance the gospel of Jesus Christ, and advanced a precedent that is not true of any LGBTQ community. While there is a historical period of Hellenism (a zeitgeist of Greek thought advanced by Alexander the Great prior to the rule of the Roman Empire) that practiced and advocated pedophilia and homosexuality as a virtue, advances in common sense across all cultures and countries have uniformly decried it and outlawed it, despite Roy Moore’s most recent attempts to make “Underage Sex Great Again.”
What I think made my nose curl at this stench so intensely I can reiterate here. While I am a Christian, and while I think that Homosexuality is a sin (just like watching porn and being straight is a sin), I also believe that members of the LGBTQ community are human beings deserving of respect and dignity. And while I do not accept what they preach, their narratives should not be persecuted, if not singled out, simply because they conform to values different than ours. (I don’t ever recall a time when Hindus couldn’t be married because their values and ideals strayed from the Judeo-Christian norms.)
Lastly, I think that it’s silly that we (especially Christians) are not more equipped to discern what is useful for building up and what is not. Given to how much we read, cite, and source, yet cannot do this outside of the bible with accuracy or conviction is confounding. Fake News is a real threat, and there is so much opportunity to be kind and loving to everyone affected by it.

Posted by StuartTheAuthor at 12:32 PM No comments: