History in the Making

I've only just started to question my Americanity.

Cleaning out my bookcase has led me to read again. I'm the kind of person to visit bookshops and buy books, only to never read them. My bookcase is a massive 7 foot tall, 6 feet wide hardwood behemoth. Plenty of room has been reduced over the years to an overburdened mortuary of titles. If the existential purpose of a book is to be read, I have read most of them, leaving them to die some kafka-esque death, smothered to death by comic books and my wife's cooking magazines.

One of the many titles I've begun to investigate is Robert Remini's A Short History of the United States, a chronicle of the nation's past and present, from the early settlers of North America to the bustling coast-to-coast megalopolis we are now. I was taught American history in school at the high school level, where I took AP US History, which I then took out of obligation. Only now as I find myself becoming aware of my citizenship do I value the idea of American history. It's important to understand the past victories and defeats of any nation. The United States is prestigious enough, so I've been told, to explore and encounter.

Halfway through I'm struggling. Much evil has come of this country. Though that is the same of any nation. (We are not exempt from fault simply because of the O'Sullivanite principals of Manifest Destiny that implicate and enunciate the divine like a crude incantation.) Germany has done as much wrong as France, or Britain, or Spain. So maybe I'm just coming to terms with my station in the world and position in time. Stricken by "White Guilt" because from a young age I was told I was evil because of the color of my skin. But it really grinds my gears to hear people utter the successes of the nation with no little regard of the skeletons lurking nearby. 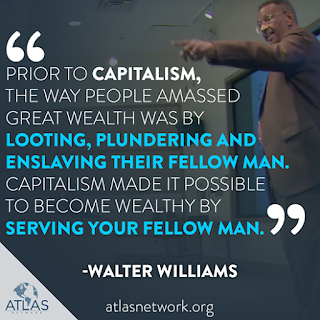 Last night I was on Facebook and one of my old christian familiars prompted my viewing of the above picture.

Understanding that I am aware of my limited exposure to American history, its myriad interpretations and subjective deductions, and that I have really only read one of three books that I plan on skimming in the coming months, I feel that I have at least some knowledge of history that forces me to call bullshit on this wildly positivist statement.

I feel capitalism isn't some new invention, though it's identity was defined profoundly during the industrial revolution. My opinion is that the marketplace of ancient Rome operated on the founding principals concerning the exchange of goods for services. Agriculture, skilled-labor, and prostitution are all safeguarded by the passing of money between hands. And all instances are some form of exploitation at one point or another. What makes me mad though, mad enough to weep my righteous tears on digital papyrus-on my day off no less-is that this statement is likely invoking the golden age of American capitalism, which was at the epicenter of the industrial revolution. It also happened to be the most notorious age of corruption in american history. As if the entire House and Senate were populated by Trump disciples, sowing the seeds of conspicuous corruption.

Remini's primary aim of his book is to follow the delicate dance between Federalism (a strong, centralized government) and Republicanism (a loosely constructed confederation of states under a common banner). And in his treatment of the development of American politics, he takes pains to establish the identity of the South as finding its origins in corporate colonies, owned by trading companies and established to run like businesses. Contrast this with the North, which was comprised primarily of Religious and Political refugees of continental Europe, which established colonies to espouse an array of philosophical principals, benefiting from the paternal neglect of Mother England. From the very beginning, the cosmopolitan climate of the north fostered the growth of a common identity that would precipitate the American Revolution. The hubris of the North would punish the South by levying tariffs against foreign exports. The South consequently couldn't export their cotton to England. The North would consolidate its infrastructure because of the increased interstate trade and growing of the domestic economy.

The picture above, in light of the following, so infuriates me because the "capitalism" of the South was borne upon the backs of slaves. Remini is clear to discourage the nostalgic pastoral imagery of antebellum south, with its wide plantations manned by hundreds of slaves. In reality, there were few plantations of this kind, the majority of slave owners being single households, with one slave or two. Pages could be written on the treatment of slaves and the post-Civil War Reconstruction efforts to establish Jim Crow laws to oppress ex-slaves. But even afterwards, our great nation was built on the backs of sweatshop workers exploited by trusts and monopolies. The country was fantastically wealthy, but hardly just, and the resulting opposition to the Gilded Age launched the Progressive Movement. Teddy Roosevelt, a figure enshrined by conservatives for primarily hunting related photos and surviving an assassination attempt (only to deliver a 90 minute speech afterwards), was dedicated to workers rights for women and children, the conservation of national parks and monuments, and thwarting corruption. I hardly think he felt the companies that forced women and children to work 12 hour days, with no respite to speak of, were "serving [their] fellow man."

Clearly my views will change on this over time, as most things do. As I read more American history, my knowledge will solidify into something more than lip service to the author of the week. But let it be known that I have made the attempt to understand our current state of affairs. I am not a sheep! Knowledge and its accrual keeps us from accepting bullshit like this and worshiping ideals without the foundation of experience and learning to stand upon.

Posted by StuartTheAuthor at 12:21 PM No comments: