I have heard, with no certainty, that the difference between classical acting and method acting is either acting inwardly or outwardly. Method acting involves entering the mind of the character being played. Classical, on the other hand, takes something attributed to the character and then learning how that character interacts with it. This could be a hat, or a cane, or a trinket, and from that the character is extracted.

Keep in mind, this could be all completely wrong. But it makes sense to me. 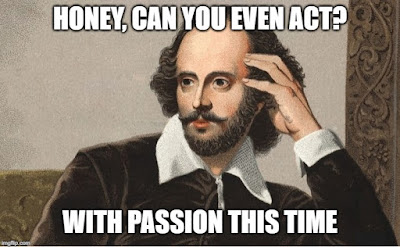 Maybe this comes from what I've seen in film and stage plays. Hamlet holding a skull, contemplating death. Sherlock Holmes with a magnifying glass, snooping around. The T-800 wearing black leather and a pair of menacing sunglasses at all hours of the night. All this makes sense to me, especially when writing a character that is outgoing, socially adept, or professional. These kinds of characters smoke cigarettes, drink whiskey, dance on poles (light, stripper, or otherwise), wear white gloves or black hats, and hold on to things while they walk. Visually, these brief descriptions invoke certain archetypes in literature and film. You can imagine the symbol of a cowboy being made up of the sum of his/her parts: wearing a white/brown/black hat, smoking Marlboro, and drinking coarsely ground coffee that's been watered down to make it last longer. But even the associations between cowboy and cigarette conjure, in my mind at least, a rogue desperado walking up a steep incline toward a crest that overlooks a parched desert valley.

Internal characters, developed vis a vis a method actor perspective, are much harder to write. In my case, characters written in first person-limited essentially demand that I get inside their heads, which is challenging. It's so easy to influence the decisions made by the characters first of all. The author is biased in different and fundamental ways. If the character is a drug addict, the authenticity lent by the author is, at best, representative and not autobiographical. (That is, unless, the author is Hunter S. Thompson.) To get inside the head of a drug addict requires extensive research and interviews with those involved in that kind of lifestyle. The creative act therefore is not solely rooted in literary devices and diction, but in how pieces of evidence are knit together into a cohesive collage that, over time, becomes a homunculus made of pixels or bleached wood pulp (depending on the preferred medium of the reader). So, in essence, the method-actor-author is like a serial killer, flaying his/her victims and stitching together the pieces into ghoulish abominations. (I'm pretty sure that's what happens in True Crime novels at least.)

At this point... I'm stuck somewhere in between the two, which is amusing because of how black-and-white I often think about things. My characters typically drink whiskey, or throw rocks across ponds, or shave in the mirror, but I also read Godel Escher Bach and I am a Strange Loop to better understand the mathematical philosophy behind artificial intelligence and how that can be used to theorize how neurons relay information through our brains. I guess there is merit for each perspective.

As Alyssa works through draft two of my second novel, it's good to consider these things so that I have some better angles on the third and final draft.
Posted by StuartTheAuthor at 7:49 AM No comments: