While I was driving around in Colorado with my buddy, and wookie life-partner, Jared "Desmond" White, I saw a few strange things.
While we drove through Aurora I saw two churches, one on each side of the street, and it preoccupied my thoughts for the rest of our trip out to Fairplay. (Originally the one-and-only South Park, Colorado!) This is problematic: the strange prevalence of churches. In my own time spent in purple and red states over the years, churches become something like Starbucks locations: places to consume palatable, current-culture approved Christianity. (Our consumerist and capitalist context we live in perpetuates this.) Ideally, Churches are meant to bless the community, and serve as conduits for the Kingdom work of God, but the presence of literally dozens of churches in a 5 mile radius makes me suspicious.
(I later found out that one of these churches was a Baptist and the other was a Lutheran, so I was probably just being a prick.) 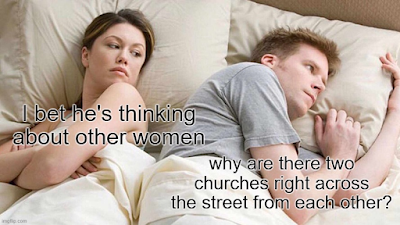 The next day, we went to a brewery, which was hosting an event for the local chapter of the Log Cabin Republican party. (I had heard about the Log Cabin Republicans from various media sources, but seeing them in the wild was strange.) This genus of Republican is LGBTQ friendly. But, noting the pride flags everywhere across their booth, I also saw a handful of "Lets Go Brandon" stickers and other by-the-numbers propaganda sharing the space. (Jared insisted, gleefully, on vandalizing my Magic the Gathering cards with them while I wasn't looking. ) Two seemingly disparate ideologies hand in hand: a movement that very literally prides itself on open-mindedness, and inclusivity, and the other playing to the fears and ignorance of another reigning political ideology.
Culture shock aside, Colorado wasn't all bad. It's the kind of Americana that I wouldn't mind transplanting to, given the right conditions. I very much enjoy the scenery and the general community vibe that comes across in each mountain town and municipality. The people there seem to know each other well enough. (I'm more suspicious of peoples' intentions than not, so you would have to go there and see it for yourself.)

Also, it was fun to see Jared in his element, in a beautiful home to call his own. My god, they have a basement and a crawlspace? Imagine a bespoke, suburbia 3 bed, 2.5 bath home, but underneath it a dungeon full of nerd shit. "Someday," I tell myself.
Posted by StuartTheAuthor at 9:09 PM No comments:

Why Does Homer go to Church?

I remember growing up with my dad dragging me to catholic mass, which in retrospect seemed like a weird exercise. (I don't say that to be mean, or disparaging to Catholics, who are ingrained to go to church quite a bit throughout the week.) I mean, why go when the heart isn't there? It's not like it changed his life, or sanctified him.

Who is Homer Simpson? I'm sure everyone at least kind of knows who he is. He's the distillation of the archetypal American man. He's a high-functioning alcoholic, who's bad at managing money, a single household income provider, and a negligent parent.

As far as I can tell, Homer is a protestant, possibly a Presbyterian, given the more traditional scaffolding at work in the ecclesiastical architecture of his church. His pastor, the Reverend Lovejoy, is a sardonic and depressed man (who's collar suggests that he could be a member of either the Lutheran, Methodist, Presbyterian, or Anglican traditions). And, as far as I can tell, all the advice he gives Homer and Marge, is tainted with by his own apathy and depression. The indications that he is just as lost as his flock, at least suggests that he is, in many ways, just like us.

God is invoked a lot in The Simpsons, mostly as an antagonist that enjoys the torture of his servants. When Homer encounters the Theophany of God, he is usually an old man, the upper half of his body out of frame and never revealed. Like many Americans, Homer is exposed to an idea of God that is distant, abstracted, and unfamiliar. Homer, on occasion pleads with God for favor, but only when he is in need of something material, like most Americans, to be honest. 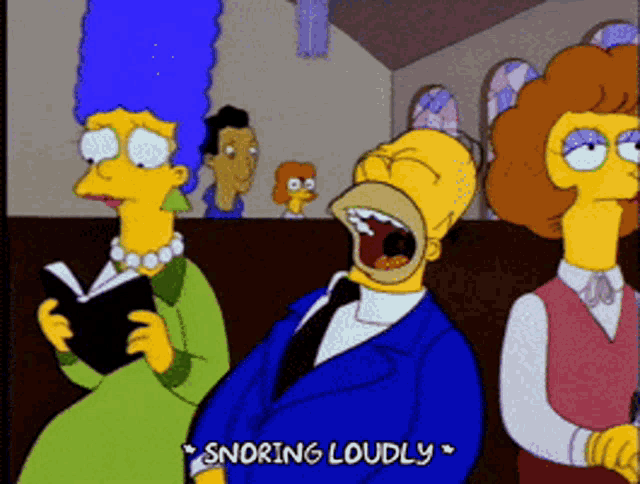 My best guess at why Homer goes to church is that he assumes that going to church serves as a sacrament. (Even if he lacks the spiritual vocabulary to describe it as a "sacrament.") But going to church, I would say, is less about experiencing something that benefits "you" the attendee, but something that strengthens those around you. It's counter intuitive, to go to church to help someone else, but that is what is effectively happening. When Homer goes to church, he is not there to encourage Lenny, or empathize with Chief Wiggam, or unconditionally love Moe, but to punch a card for himself. "At least in "Homer the Heretic" (Season 4, Episode 3), Homer is saved by the very people he spurns, much to his chagrin, thus emphasizing the importance of church fellowship and community (at least implicitly).

The idea, though, that someone would go to Church "just because" eludes me.

Posted by StuartTheAuthor at 2:17 PM No comments:

My introduction to Norm Macdonald was split between old SNL reruns on Comedy Central and his movie “Dirty Work.” His delivery, which was so deadpan and blunt, evoked a personal courage that was so foreign to me. (And still is.)

When I found out that he died I felt crushed, like a piece of me was lost. Because so many talented people pass away into the oblivion of death and, despite every effort of their fans, eventually fade from memory.

Often when someone dies, I say to myself, “I hope you were saved,” because I honestly wanted to see them again someday. It’s a selfish desire, but I know that that person was created for God’s glory, and that they were blessed with talents that, like an artist’s signature, illustrate an aspect (or characteristic) of God. And when someone is facing death, their egos weaken and they re-evaluate the nature of the universe before they leave it. I hope that, someday, my own heroes will realize this, so that they can be in on the joke: that their magnitude was not for them, but for God.

I did find out though, after the fact, that Norm was a Christian. Or at least, that there was evidence that he was. (Because no one knows for sure, do they?) It brought me comfort knowing that after a lifetime of beholding the injustice of the world and speaking truth to that as a comedian, that Norm was finally with God and telling his jokes in his presence. That reality brings me hope, because we are not here to be great in our own right. We are here to be great and know that it is because of God that we are great.

I’ll catch you again, someday, Norm. Until then…

Posted by StuartTheAuthor at 4:27 PM No comments:

Quick Update - AKA. Workin for a Living

What have I been doing lately?

The better question is what haven’t I been doing?

I’ve been working on a couple projects, which sounds exciting but one can only make so many announcements about that before it becomes just an excuse to be anti-social.

The anthology expansion of Dynamic Synapse Protocol I am aiming to finish by the end of this year (famous last words, I know). It’s currently on hold for a paid gig that I am doing for my designer (and founder of ELECTI STUDIO), which has been super fun. It’s been a wonderful exercise in pulling my head out of my ass and dedicating time to something that isn’t so horribly ME.

My daughter is starting kindergarten in a week, which seems a tad surreal. I’ll let you know how I feel about that once I’ve figured that out for myself.

Lots of overtime, so much overtime. This will be my third week on oncall in a row. It’s set up so that we have to work one week once a quarter. I typically work about 8 weeks of the 14 week quarter to cover expenses. (Inflation is a bitch-and-a-half.)

That’s all I have right now. Pray for my sanity.

Posted by StuartTheAuthor at 3:45 PM No comments: