Thoughts on The Witcher 3 And RPG Story-Telling In General

While I'm almost certain that others have documented this I was thinking about interactive storytelling in the context of playing video games, specifically western RPGs. (I have little experience with Japanese RPGs so I won't be covering that here.) 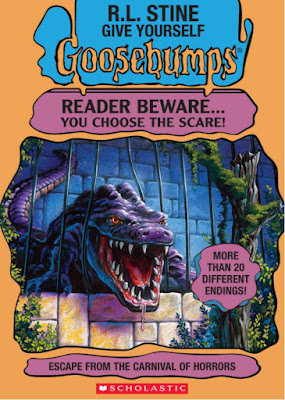 There's been examples of "choose your own journey" storytelling already in printed media. When I was a kid, R.L. Stine (of Goosebumps fame), introduced a new line of books called Give Yourself Goosebumps, where you could explore a book with branching plots. Generally you would read the book and then flip around the pages at certain points, guided by the spooky editor to continue the branching plot. The limitation of course is that the overall plot length was not very long, as far as total time spent reading. Honestly, I never read one to completion. I wasn't much of a reader until High School. However, I would see them all the time at my library when I was in elementary school, and flipping through them, enjoyed the concept more so than the content.

Similar to my love of reading, my love for western RPGs didn't bloom until high school as well. The first one I remember playing was Star Wars: Knights of the Old Republic, which had a variety of choices in game that would determine various future plot points. At the end of the game, you could even choose an "evil" or "good" ending! Likewise, Vampire: The Masquerade – Bloodlines also had branching storylines and alternate endings based off of decisions in game with various factions. (Still one of my favorites!) Of course, nowadays, games can have upwards of 20 different endings due to the level of resources made available by AAA studios. And this is where The Witcher 3 comes in to play. For those unaware of the franchise, The Witcher 3: Wild Hunt, is a western fantasy RPG developed by Polish game studio, CD Projekt Red. The game is based on the fantasy novel series of the same name, by Andrzej Sapkowski. The game takes place after the events of the books. Following a witcher named Geralt of Rivia, who is a tradesmen dealing in monster killing, royal body-guarding, and general mercenary work. For a general review of the game, see here. 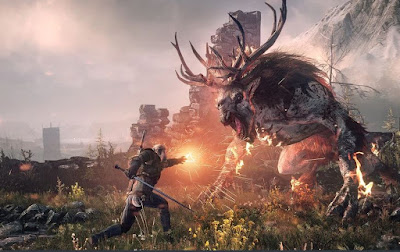 Before I explain why I like The Witcher 3's general approach to storytelling, I should explain how most western RPGs depict their characters. Most feature protagonists that begin as blank slates with varying levels of cosmetic customization (from clothing to physical appearance). A smaller number feature fully developed characters that the player enters into to vicariously experience a narrative. (The Witcher 3 utilizes the latter model.) After this point, western RPGs will excel or flounder depending on the degree of immersion the simulated game environments generate. Most games can succeed if the character design and world design are adequate, but its the narrative pieces that string the player along for 60+ hours of gameplay.

Western RPGs simulate both standalone novels and serialized fiction because they capture multiple narratives contained in a greater world. A grand quest line can last up to 20 hours, simulating a novel, whereas one off requests and adventures serve as short fiction set in a larger conceptual world. Specifically, what I like about Geralt's character in The Witcher series, is that his life experiences accommodate the variety of in-game situations and dialogue choices that guide the progress of the game. Oftentimes, western RPGs feature a narrow subset of dialogue choices during play. These amount to A) good, B) bad, C) irreverent, and D) neutral. The intention of using these options is to give the character freedom to interact with the world and its characters, but they are arbitrary at best and functionally limited. Geralt's life experiences are varied enough that we can believe his responses to actions in-game. Not only that, but Geralt is an imperfect character, and his responses can vary between forgiving and capricious, with far reaching consequences for his actions. For example, Geralt has an opportunity at one point in the game to overthrow a nefarious king. The ability to do so is determined by whether or not Geralt assaults a non playable character several hours before the plot point opens up. And it's crushing to have the opportunity to end an evil king's reign, only to be stonewalled later on. 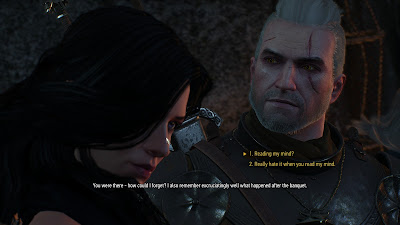 It's a weird thing to ponder the illusion of choice in games because it's all scripted ahead of time. But I like the concept of an interactive novel. It appeals to me as a greater form of storytelling, offering immersion that just isn't possible with conventional storytelling methods.

Posted by StuartTheAuthor at 11:45 AM