Hey-ho-let’s-go talk about something a little lighter. Ranking systems, contrived or rooted in reality, have always captured my attention with such vigor that I often find myself arrested by them. It’s cathartic, discovering what is—and is not—worthy of our affections. A crystalline high like no other. (Maybe it’s similar to the effects of public shaming, or social outrage, knowing that the world’s fattest man was ousted by some young upstart from Wisconsin?)

Even though it's slightly delayed, I wanted to feel out the things that moved me in 2019. So the following categories summate my spurious attempt to do so. (Does anyone else alliterate when they’ve had a couple of beers?)

YouTube has evolved so much that I scarcely remember what it was before. But what it is now is a wide array of DIY cable networks, where the things you actually like are all prepared and ready to be viewed at any time, any place. This year, while videogamedunkey and Easy Allies have vied for my affections, I somehow have come to love TysyTube Restoration. Tysy, who I suspect is from Switzerland—his pieces are demonstrably European, varying between French, German, Spanish, and Italian—finds derelict baubles and proceeds to renew them with practical equipment that I’ve known my whole life. Much like the surgical videos that cater to cathartic eruptions emanating from pustule-ridden human tissue, there is an inherent relaxation that accompanies Tysy’s exhaustive and meticulous excise of wretched decay from inauspicious relics of the past. (Ooof! This is a strong beer!) I think there is an eternal sediment that awaits to be shaken from our lives. We all yearn for it. We all seem to be guided toward this principal that we are in need of cleansing and purification. Tysy’s renewal, then, must be tapping into a reservoir far more primal than cat videos and pirated broadcasts of Last Week Tonight with John Oliver. 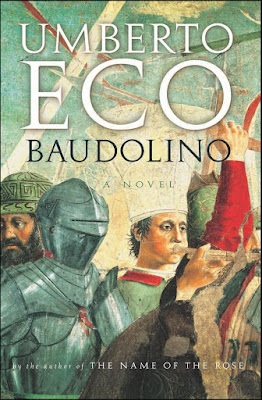 What a difficult thing to quantify: books and their recreational appeasement. I have read The Mysterious Flame of Queen Lorana, The Island of the Day Before, Numero Zero, A Once Crowded Sky, and just began reading Baudolino. There have been comic books as well. There always is. But the act of reading a book always—to me at least—becomes a comprehensive investment. Even though I haven’t finished it yet, I find myself just enthralled with Baudolino, which narrates the exploits of the eponymous main character through a very playful adventure of wit and deliberate candor. As always, the story qualifies as “historical fiction,” given the breadth of detail given to reconstructing the 13th century milieu of continental Europe. Umberto Eco, author of all the above (except A Once Crowded Sky), wields a level of interdisciplinary competence that I have not yet encountered in any living person, other than N.T. Wright. His stories are exhaustive and precise. Every detail is intentional. Not only are they entertaining, they are informative and critical of society and historical movements that predominated each era of Western Civilization. Much like Paul Gilbert (a virtuoso guitarist), Eco very much conveys his love for his subject, and his unrelenting desire to communicate the way he feels through his work. 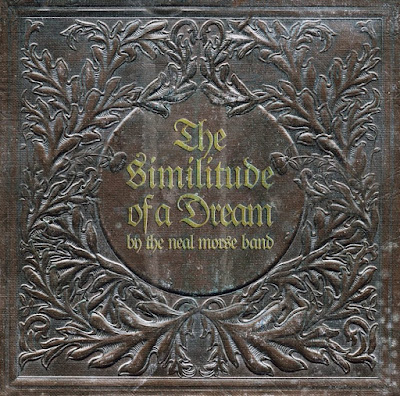 The Similitude of a Dream kept me above water for the later half of 2019 in a way that I had never thought possible. Especially because most Christian music is terrible, filled with bad theology, and songs that lack the emotional honesty suited to the average human being. Neal Morse is well known in the progressive rock community as a singer and songwriter, and adept at cultivating a community of session and touring musicians. And despite the fact that he unabashedly writes christian worship music, musicians from all philosophical dispositions love collaborating with him. Mike Portnoy, who left Dream Theater in 2010, once said that he equates Neal Morse to Paul McCartney in song writing ability. Personally, I feel, Morse lends an artistic credibility to christian music (compositions and lyrics) that have not been (in my opinion) demonstrated since the Enlightenment. The Similitude itself is a double album, within a larger double album (Bro...), based on John Bunyan's Pilgrim's Progress. Like most progressive rock albums, there is a story that spans the entire work, chronicling the tumultuous life of a man seeking God in the real world. The album is all over the place emotionally, and seems to touch all the parts of life that we, as people, encounter on a daily basis. Incidentally, it's one of those albums that I wish I had in my early christian years. Broken Sky, to put it bluntly, saved my life. 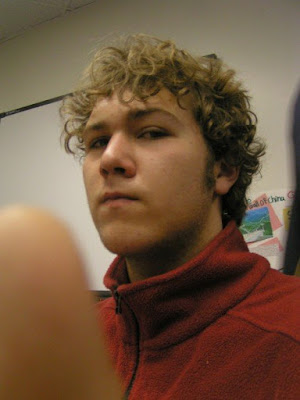 It's Desmond. (Who the fuck did you expect?)

2019 was one of those years where, after a decade of not playing music on a regular basis, I wanted to make my glorious return. When I was in college, I was the lucky recipient of a cash prize from abstaining from alcohol until I was of legal age, which I used to buy a guitar, custom built to my specifications. I immersed myself in the speculative guitar making community, researching the different tonal aspects of wood and why they are used. Guitar pickups were another abyss I had to wade through, listening to different sound samples from guitars of similar build materials. After this rock-polishing, tumultuous journey, I received the guitar which had been damaged in shipping and I had to wait an additional 6 months before it was repaired. After putting an additional $1000 into the instrument, I was 30 years old and feeling completely shitty about my adventure in guitar gear.

However, last year, I finally got the genuine item (used): the Ernie Ball Music Man John Petrucci signature guitar. And, in one, year I went through more strings than I have in almost ten years. 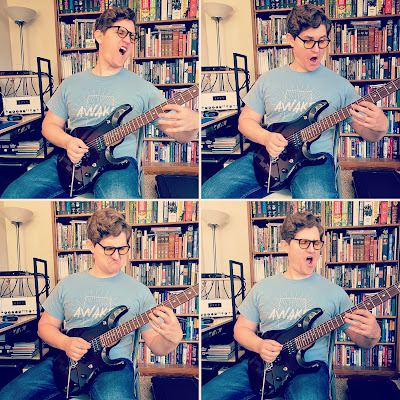 I have a really ugly guitar face...

I'd like to do this more often and I'm hoping to actually get a more formal list coming soon for each new year. I hope I was able to make you laugh, ponder, and muse.

Posted by StuartTheAuthor at 12:31 PM