Ode To a Shitty Burger 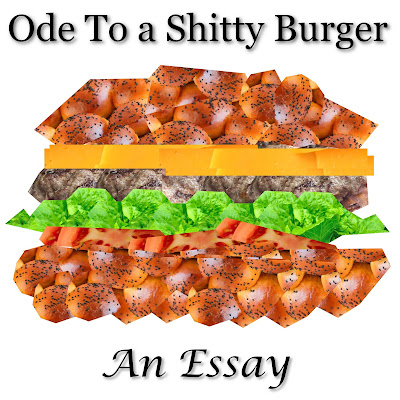 I like, really, anything with two slices of bread and a piece of meat in the center. It's primal and debasing to hold a burger and try to eat it as, like a collapsing star, it disintegrates into a slurry of deliciousness. Growing up, I would get a burger before getting my allergy shots for bee venom, convinced that the meat in my belly made me impervious to pain. What a ludicrous conclusion! But a serviceable salve to ease my fear of needles. Burgers were my answer to most of all life's problems when I was 6 years old. Today, they still kind of are.

Burgers, like friends, are fickle. Not all burgers are created equal. Some burgers disappoint and demoralize. Some even betray you. They illustrate the lie of consumerism and the commodification of once sacred and immutable things. Like a life of watching porn and encountering sex for the first time with another human being, eating a Carls Jr. Six Dollar Burger illuminates the hyperreality of bread, meat, cheese and vegetables advanced in the fictional ad space, while what is unwrapped in soggy wax paper is the cold truth: that all of us have been lied to. The burger today, indeed, does has a true referent, but it exists elsewhere, far from any motor oil encrusted strip-mall parking lot.

The shitty burger is the aesthetic product of many components. Down the street from my apartment, there is a decaying fast food chain, local to the Santa Barbara area. The reviews online are as abyssal and empty as the employees that absently attend the greasy kitchen griddle, and food poisoning is alleged all too frequently in that virtual space. The dinning room is always empty. Aging CRT televisions are void of light and sound. Vending machines contain stale baubles, forgotten behind scratched, hazy plastics. The employee that takes your order is tense and on edge. The fact that you are there in this solemn place is an act of violence. The order will most surely be incorrectly filled, but out of kindness you feign ignorance. The truth behind the shitty burger is the commiseration found in consuming it. The thin, dry patties are ingested under the wan light of a desk lamp in solitude and shame. In eating it, you have contributed to institutional racism and, simultaneously, are now emboldened to end it.

I would disagree with the post-modernists that we have lost the true referent, what I refer to as the proto-burger. Just like the desolation which attends the shitty burger, the proto-burger is a sum of harmonious parts. Just as the fresh cut tomatoes, the grilled onions, the chilled lettuce, and ground sirloin unify to achieve mythic synergy, so people also gather around charcoal grills on lazy Saturday afternoons to experience unshakable community. At the checkered picnic table, people of all kinds and creeds have the opportunity to experience the original and incorruptible authenticity of the proto-burger. And, like waking from a bad dream, the memory of the shitty burger fades, ultimately to nothing, thereby allowing only the knowledge of the proto-burger to endure.

Posted by StuartTheAuthor at 9:08 AM