Two women with calloused hands haggle in a prop-up tent. Vendors eye each other suspiciously, unboxing imported merchandise. Trinkets and baubles. Captured essence of island life made by the hands of children thousands of miles away. The coffee is “Kona”. One pound for twenty-four dollars. “I’ll give it to you for twenty,” says a Filipino woman. 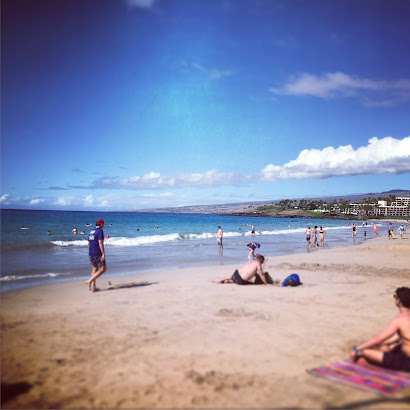 The Martian desert lies above the tourist alcoves, parched by the exhausted wind; a dry heat. Golf carts roam in herds on distant greens. Lonely highways, arrested by total darkness in the quiet hours, lit only by sickly torches of fluorescent light. Beaches, purified by time, covered in plastic awnings, are serviced by the true wards in the shadow of Pu’ukohola.

Posted by StuartTheAuthor at 7:14 AM