Late last year I was scrolling through my Hulu queue and saw the below: 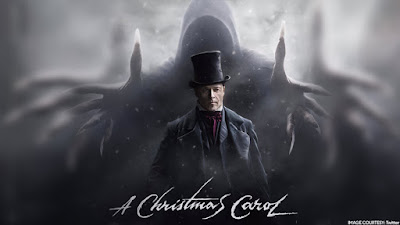 Holy shit! Is it my birthday? I thought. Guy Pearce is my jam! So of course I embarked on a binge of this very short miniseries. (3 episodes, 3 hours)

I was impressed. Before I tell you why, consider the following.

Every so-and-so has done the Christmas Carol story before. Despite the story being of English origin and set in the very specific context of industrialized England, somehow Americans has also been hooked. This is likely due to the biblical overtones of the story. The three ghosts can loosely represent Christocentric ideas like the Trinity or the three days Jesus spent in the tomb after his crucifixion. The story of redemption, of forcing a man to repent for his sins and receive salvation. The lessons taught about generosity, grace, and the worship of material wealth. Even Scrooge's first name, "Ebenezer," is derived from the Hebrew word "ebhen hā-ʽezer" (literally "stone of help"), to symbolize the divine assistance Scrooge receives from the spirits, as well as the heart of stone Scrooge possess until his redemption. It's all there and easily received by a population that is loosely familiar with biblical verbiage.

The story is so ubiquitous (over here, "across the pond") that I grew up on several iterations of Dicken's work including, but not limited to, Mickey's Christmas Carol, The Muppet Christmas Carol, Scrooged, and A Christmas Carol, featuring George C. Scott (1984). (While jogging my memory, I discovered a version with Patrick Stewart!? What have I been doing with my life?) And, even if some of these versions are unfamiliar, it's likely that at least one of these has made it into your life at some point.


So, yes, I was very impressed with the recent version put on my FX. The expanded format allowed for a greater level of narrative depth in areas previously unexplored, such as the politics of the afterlife and the hellish bells that toll there. There is also motivation on Marley to move Scrooge to repentance. For, if Marley fails, he will be cast into an unrelenting purgatory. The #metoo movement is invoked when Scrooge forces Mrs. Cratchit to undress in front of him so that she can take out a loan for live-saving surgery for her son Tim. The spendthrift policies of industrialized Britain and the deadly cost of unbridled capitalism are as relevant today as it was then (corporate loopholes, poor working conditions, the wage gap, the working poor, unaccountable executive, etc.). There is even a scene depicting the rationing of coal, where Cratchit is, absurdly, charged for having additional coals provided to his stove in Scrooge's office. Each of these details cement the viewer in the time period and add layers of complexity to the story that has too often been sanitized by an over-emphasis on joyful climax. (Yes, Scrooge is redeemed. But that doesn't negate the pain and neglect he caused, or the inevitable restitution implied by his change of heart.)

But why write about this in the summer? Why is this important?

I actually was hooked by a line read by Pearce in the show, and I knew that I would want to write about it eventually, but never had the time to do so. Specifically, Pearce states the following:


"A gift is but a debt, unwritten but implied."

This idea got my attention, as I languished on my mom's couch last Christmas. Specifically, I had bought my brother a 3D printer, which I wanted to give as both a celebration of his personal industry and the accommodations he made for me while we visited our father in Hawaii. It was quite an expense, something only made possible by money recently bequeathed to me from my late grandmother, but it was worth it. The above quote seemed to explain something behind the materialistic motivations inherent in gift giving. Though my brother was none-the-wiser, there was some part of me that that sought recompense.

(This is all the shit that goes through my head when I write about something. After all these paragraphs, now I begin the actual article.)

I've always been fascinated by the interaction of words, specifically when people use different terms interchangeably. The language behind share and borrow is markedly different, despite their everyday use as equivalents. Both terms invoke the collaborative ownership of something (wealth, property, resources, etc). Both are primarily positive in connotation. Where the terms part ways involved the object of the sharing or borrowing, In the latter case, borrowing implies that resources gained are returned. Sharing implies extended or perpetual ownership. I would not be the first person to write about the implications behind gift giving. But what I seem to get stuck on is the liquidity of the terms.

Sharing reminds me of the early Christian Church. In the Book of Acts 2:42-47 we read the following:

42 And they devoted themselves to the apostles' teaching and the fellowship, to the breaking of bread and the prayers. 43 And awe came upon every soul, and many wonders and signs were being done through the apostles. 44 And all who believed were together and had all things in common. 45 And they were selling their possessions and belongings and distributing the proceeds to all, as any had need. 46 And day by day, attending the temple together and breaking bread in their homes, they received their food with glad and generous hearts, 47 praising God and having favor with all the people. And the Lord added to their number day by day those who were being saved.


The only reason I bring the bible in to this, is because Americans typically leverage biblical language, the language of A Christmas Carol, while championing the acquisition of wealth, equating divine favor and moral excellence to those who were most adept. But, clearly, in the bible we see a different idea taking place: the sharing of resources for the betterment of the collective. This is essentially a prototype of communism, where members of the community own the "means of production."


Scrooge's statement, where a gift demands reciprocity in some form, brings an argument against charity, that in giving there is an implicit motive to justify one's self. Or, we simply give to feel congratulated and compensate for a moral failing that looms over our consciousness. The moral of A Christmas Carol promotes the idea of selfless giving, specifically grace.

Borrowing, as a concept at least, implies temporary ownership. It is active on the part of the supplicant, passive on the part of the provider. One goes to an institution and asks for a resource and is given that resource, with the understanding that this resource will be repaid in some capacity over time. Obviously this practice is monetized to favor the institution. Some form of additional reciprocity is sought to justify the initial lending. This is typically done with charging interest, where a percent of the total money left to be repaid is charged in addition to the principal. I'm laboring on the minutiae of this to prove a point: of the two terms, only borrowing is inherently predatory.

When we share our resources, we are committing to mutual prosperity and strength. A community, even on the fringe, will survive indefinitely when operating under the concept of sharing resources. Likewise, when someone buys "shares" in a company, they are participating in a group effort to see something come into being. Sharing, in my mind, aligns with the concept of grace; that is, unmerited favor. Grace is a gift. There is no implied debt or language hinting at future reimbursement. It flies in the very face of modern theories like laissez-faire capitalism, where economies are advanced on the basis of self-interest and competition over limited resources. This is incompatible with the Gospel and the concept of sharing. But, even Christians seem consigned to rationalize the use of free market capitalism as a means to an end, or a necessary evil that we must all endure for the sake of general order. Verily, Jesus never said, "Blessed are the poor, that is, unless they deserve to be poor because they collect food stamps, make bad decisions, and are addicted to meth." Sharing involves two active participants, and, rather than the supplicant approaching the provider, it is the provider that approaches the supplicant.


At the end of the day, the nuance of this argument can be obfuscated by quick tempers and personal narratives. Objectivity flies out of the window and we typically keep to our camps, where the firelight is warm, comforting, and calming. Rarely are we forced to venture beyond the borders and confront the wilderness. That would require bravery, after all. I know that my philosophy is influenced by the teachings of Jesus, which some may find hostile for tertiary reasons. If you, reader, are not a fan of the whole Christianity thing, then consider something like the Utopian future of Star Trek, embodied by the fictional organization known as the United Federation of Planets. In this speculative timeline, resources are shared within the federation. Though there is money exchanged between the Federation and other species (ie, the Ferengi, who covet "gold plated Latinum"), the act of doing so is implicitly denigrating to both parties. And, though it seems absurd to live life based on fictional principals, just because it's not real doesn't mean it can't have an impact on how experience the world and interact with it. (In my case, I believe Jesus is reality, which I would call a "win" in my book.)

Anyways, that's what's been on my mind the past few weeks.

In other news, I finished my 3rd book this weekend. I am beyond excited to share the details with you as the book enters the design process!