The Process (Of Writing a Book) 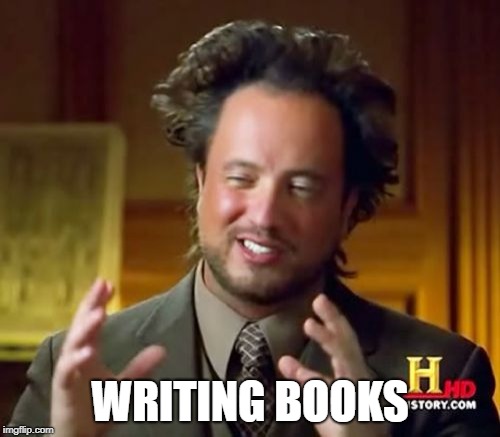 For the first time in a long while I have nothing to do this weekend. My wife is currently looking at my second draft, while I am on child duty until she completes. While it would be nice to catch up on my personal reading, I’m not sure if that will happen or not. I seem to have less and less time for that these days, unless I’m on vacation. I mean, there’s certainly time to do all these things, but binge watching Star Trek: Enterprise has monopolized our evenings. Everyone likes to shit on that series, but it’s great. When I imagine a speculative fiction of the first years following warp space flight, Enterprise embodies what I would expect to occur: cultural tensions between alien races that are trying to be helpful, humanity’s own immaturity, and the collective mustering of human potential for the better of tomorrow. Ideally, a Star Trek property should encourage us to be explorers, to be understanding, to be open to learning new things, and more than any other, Enterprise exceeds that vision.
So maybe when that is over I can start reading in the evenings again, especially while my kid is still content on going to bed at 7pm every night. She’s like her dad. She sleeps like a rock and we are very grateful.
While I’ve written about this before, most of my older posts were archived permanently post-rebranding. I wanted to revisit and share again the process by which I write books. It’s probably my personality—well, definitely—but I never have issues getting ideas on paper. Many times I’ll read something that self-referentially talks about the writing process as this creative struggle. Personally, I don’t get what the big fucking deal is. But it only recently occurred to me that maybe my “system” has a lot to do with the way I lay out everything and then fill in the gaps
Usually I’ll get an idea, a two sentence extract, and start with that. It’s concise and purposefully focuses on conceptual details rather than specific characters or settings. That’s “part one-and-a-half” of the recipe. The second part of this is really the expansion of the extract, which I call a “concept bible.” Any ideas relating to the story are put in this document, almost as if it was a wiki entry all spread out. See below for screen shots from the Concept bible for my third book:


The above are only screenshots of a large document. By the time the book is finished, this document balloons in size. But I can’t even say how many times this document has saved my ass and helped Alyssa track all of my thoughts.


What I started doing for this book—and I think I will continue doing so—is that I created a character mythology. Every main character follows a journey (ie. Heroes’ Journey) that demonstrates how they grow and change over the course of the narrative. Immaturity to maturity. Child to adult. Unknown to known. I wanted to start keeping track of these details because I felt like my books didn’t demonstrate enough internal character development. Similarly, I create artificial rules for the narrative before I begin writing, which I just call “Book Rules.” Whereas a character mythology is written after I receive feedback for the first draft, book rules serve to, from start to finish, ensure that certain technical practices are consistent throughout the story. For instance, if I create an artificial language for my story, I write down the proper syntax in this document so that both Alyssa and I adhere to these rules throughout the entire book.
The first draft feedback, like my first novel Spirit of Orn, was provided by my best friend Desmond White. This document I rely on is invaluable. Good feedback is critical in tone, which helps in two ways. First, good feedback is humbling. I laughed so hard when I read the feedback for Spirit of Orn, that I was crying. Desmond lays into my books and points out all the inconsistencies where my ideas are pompous or overcooked. The second thing that’s valuable about feedback is the substantive additions that come from the reviewer. Desmond, for instance, suggested that I read Brave New World and Notes From Underground to supplement and further some of the compelling ideas I was exploring in Spirit of Orn.
The last document that I keep around is the “cut” document. Most of draft one is rewritten for draft two, and sections that are conceptually valuable, but no longer suitable for the story, I cut and paste to a separate document. Draft two of my upcoming book has the same word count of my previous draft, but my cut document is 21 pages long. I’m never sure what I’ll need or return to, so this document is a backup of old (and mostly bad) ideas.
The process that I use works for me. I like the structure. I’ve always been very good at visualizing the grand narrative, but the minutiae is so hard for me to keep track of. I’m always encouraged by hearing from others about their way of doing things, so I hope that this is just good perspective.

Posted by StuartTheAuthor at 9:48 AM