What I Learned About Puberty Playing Vampire: The Masquerade – Bloodlines 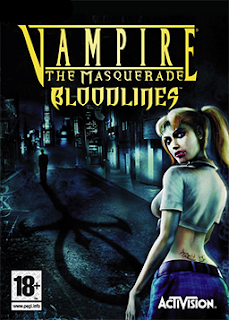 To be honest, I was shooting blanks this week. There’s a lot going on in my life right now, so it’s difficult to focus on one thing at a time. Right now I’m studying for a Networking Certification (for IT) and my daughter just got into Montessori Preschool (awesome) that will cost an additional $250 a month than what we are paying now (not awesome). But that’s an investment I’m willing to make in my daughter’s future, so whatevs’.
But yesterday, in a moment of tongue-in-cheek amusement, it dawned on me that this one PC game I had fun playing back when I was in Middle School/High School, seemed to carry with it a deeper purpose, one that personally resonated with me. Truth be told, I am not much of a gamer anymore, unless there is a very directed and interesting story running through the game. (I’ve always believed that video games are a contemporary form of pulp fiction entertainment. Readily available and easily discarded.) For instance, The Witcher 3 is a masterclass of interactive storytelling, with a fascinating intertextual analysis of both Fantasy and Science-Fantasy genres existing in the same world. (Portals, guys!). The Stanley Parable also is an interactive discourse in determinism and the illusion of free will presented in videogames in general. (The player feels in control of their destiny, but in reality they are being tricked into running a predetermined maze built on the foundation of mathematics, code, and scripted sequences.) These two are among many examples of incredible storytelling in the gaming medium, but that’s not what this entry is about. It’s about the cartoonish and willful depictions of Vampire clans in pop-culture and roleplaying, specifically how they are rendered in the gameplay of Vampire: The Masquerade – Bloodliness (a PC iteration of the world-renown tabletop RPG) and how these clans embody the fantasies of young adult society.

The following is an individual treatment of each clan, all of which I had an opportunity to play through the story of Bloodlines about 15 years ago (good god, I’m old…). The central thesis of this entry was listed above and the below serve to establish it..

One of the easier clans to play as in Bloodlines is the Brujah, because of their favoring strength and less-than-diplomatic resolutions to puzzles and conflict. In gaming terminology, you could call this class a “tank,” meant to absorb damage and draw conflict away from more surgical players exercising specific, high power abilities with long “cool-downs” (aka, the time required to elapse before an ability can be used again). The Brujah are described in the game as anarchists, those against the system, passionate about causes that benefit the disenfranchised. I am keenly aware of the youthful rebellion associate with puberty, and the Brujah epitomize radicalization, independence, and strength. It’s the ideal class for any pasty kid with angst for days and a mom and dad hell-bent of getting them to go to church on Sunday mornings. The need to feel like you have a voice in a crowd, and be loud enough to shout them all down, is such a desire as a young kid going to high school. This game capitalizes on that fervor with profound alacrity.

A clan that I personally identified with was the Gangrel. Gangrels are loaners, wild things that like to do what they want to do and don’t care about the trappings of social commitments. They are content to run free in the forest, transforming into animals and vaping THC oil. Gangrel are depicted in Bloodlines as stoners meshed with furries out of costume. While they are more likely to embrace bestial instincts, its more because they just want to be left the hell alone. I mentioned that I personally identified with this clan, primarily because I didn’t subscribe to any institutions growing up. I didn’t play organized sports (and if I did, I never stuck with one), I didn’t participate in social clubs, and I didn’t have friends at all really. I was content in my own world, which for a lot of kids growing up, is enough. Adolescence is the critical period for finding your identity, and for some that time hasn’t arrived yet. That’s why there’s college.

The Malkavians is one of my least favorite clans in Bloodlines, despite having some of the best dialogue options in the game. This clan in essence is grounded in utter insanity, and the traits demonstrated in the game favor those with unique resolutions to quests or puzzles in general. I don’t like this clan because there’s certain people in High School that I despised that readily subscribe to the modus operandi of the Malkavians, in that they didn’t ever shut the fuck up. Giggly teens constantly talking and pretending that they (and their antics) are god’s gift to the world are incorrigible and irritating as fuck. In the game specifically, Malkavians demonstrate a certain prescience and ability to have insight into potentially ambiguous situations. I find this unendingly amusing, because anyone who is crazy believes that they are the only authority on everything. This manifests in the professional world in the form of “one-upmanship,” where you might be talking to a co-worker about how you found a really great deal on chicken breasts at Sprouts, and this motherfucker comes in and says, “oh yeah? This weekend I went to ONE THOUSAND STORES.” And you just want to punch them in the throat, but can’t because medical insurance.

In High School, I was very sensitive. Constantly unmoored by love and it’s entanglements. I did a lot of stupid things back then because I just wanted to feel loved, by someone, anyone. In Bloodlines the Toreador clan emphasizes a lot of these romantic tendencies of young adults. If Romeo and Juliet were vampires, they would be Toreador, because they saw each other for an instant and fell apocalyptically in love with each other. Like calling your girlfriend/boyfriend on the phone and talking to them for hours about stupid shit and then having a game of chicken at the end to see who will hangup first. The Toreador clan fulfills the fantasy of passionate, sensual love to every teenager. They are obnoxious like everyone in the Twilight franchise. And they have the power to seduce and charm, a power that every awkward middle schooler wished they had the ability to exercise on command, instead of just hanging out by the snack bar on hay bales waiting for dance to be over. If the Toreador clan was a philosophical movement in history, they would be the embodiment of the Romantics, in essence.

The Tremere, a clan of blood sorcerers and adept followers of magiks, I have difficulty placing into my paradigm of “clans analogous to middle school and high school experiences.” I will say that at my highschool there was a lot of people involved in new age pagan movements, such as Wicca and Asatru Paganism. (In matters of religion I am less vitriolic than I was in college.) Suffice to say, the art of divination and extispicy garners it’s coarse reputation by established religious norms, because magic (at least in Judeo-Christian religious tradition) is seen as a means of hacking reality or rigging the system. In essence, the practitioner is unhappy with the current state of reality and endeavors to change it. So, maybe the Tremere represent a sophisticated symbol of my desire to cheat on my math tests? Otherwise I think it’s safe to say that the RPG developers of Masquerade were like, “fuck! We need wizards,” and voila.

Oh boy. The Ventrue. Those destined to be hated because they live on top of the social ladder. The Ventrue are the elite bourgeoisie of vampire culture. To be one of them, is to be adored. To not be one of them, it to jealously admire them from a distance. In High School and Middle School, everyone wants to be popular. Popularity is both a tool of power and affection. Power is an active principal, typically a force moving outward on to other people. (ie. Using your status to gain favors or influence certain social politics.) Affection is a passive principal. The adoration of those below you who desire to advance their own social position is gratifying in two ways. First, you feel like you are royalty, which implies you have a good life. Second you have the power to dictate the social hierarchy. The Ventrue idealizes a foundational desire in young adults to feel like they can move up in the social hierarchy. Moving up allows us to get better friends, or access a promotion and perks. Popularity is the ultimate distillation of the Ventrue. And the favors afforded by them are so morally compromised, you might as well sell your soul to the devil.

Last, but not least is the Nosferatu clan, who apparently live in the sewers because they are so ugly that just seeing them would expose the Vampire Illuminati. Those that feel completely isolated from society because of their looks or because of their circumstances, identify well with the Nosferatu. Their external appearance (sociological or physical) would compel these individuals to the heights of critical acclaim, like a scorned nerd in high school growing up to manage a tech empire and marry into a harem of trophy wives and extramarital partners. The Nosferatu are resourceful and adept at gathering intelligence. In other words they are indispensable lackeys. I didn’t know anyone like this in High School, truth be told. So maybe the Nosferatu is the AV Club?

So there you have it, my wild hair-brained theory.

All in jest of course.


Posted by StuartTheAuthor at 9:25 AM